I don’t have the necessary hardware to move forward with a cassette-phone adapter, so I’ve decided to work on the soft side of things. To make recording of the cassette easier I created a script that takes a number of images and produces a single audio file containing the SSTV audio of all of the encoded images.

This task is a compilation of sorts: source images are “compiled” into SSTV WAV files that are then “linked” into a single large WAV file. Rather than create a shell script I decided to use GNU Make to create the sound file. Make seemed to be a good fit for converting a number of files into several intermediate formats and combining them.

I found a Python based program called PySSTV that encodes images into a variety of SSTV formats, but not without a catch. PySSTV only uses the portion of the input image that is visible at pixel-to-pixel scale with the SSTV canvas. This means the input images need to be resized with ImageMagick before being converted. Once the images are resized and converted to WAV files they are concatenated using SoX. SoX is also used to create a small bit of silence that is placed after every WAV file in the concatenation. This silence allows the current slide to be viewed before starting a new slide.

After writing up this makefile I tested the output sound file by playing some audio through my laptop’s speakers to air-gap the slideshow to Robot36 on my phone. The quality is pretty poor because of the air-gap, but the slideshow progressed as expected. Below is one of the images captured from the playback. 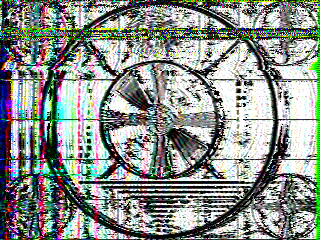 The makefile and sample slides are published on GitHub for anyone who is interested to see the solution or for anyone who wants to generate their own artchive. I have also included instructions on how to record a tape with the output WAV file.