Yesterday I tested a cheap radio with the Push to Reboot prototype. Until now I have been testing the prototype using a DTMF generator app on my phone and a standard 3.5mm TRS auxiliary cable. I switched to a 3.5mm to 2.5mm cable and attached the output of an Amcrest ATR-22 directly to the input of the DTMF module. I hit a couple snags along the way, but nothing came up that wasn’t too easy to fix. 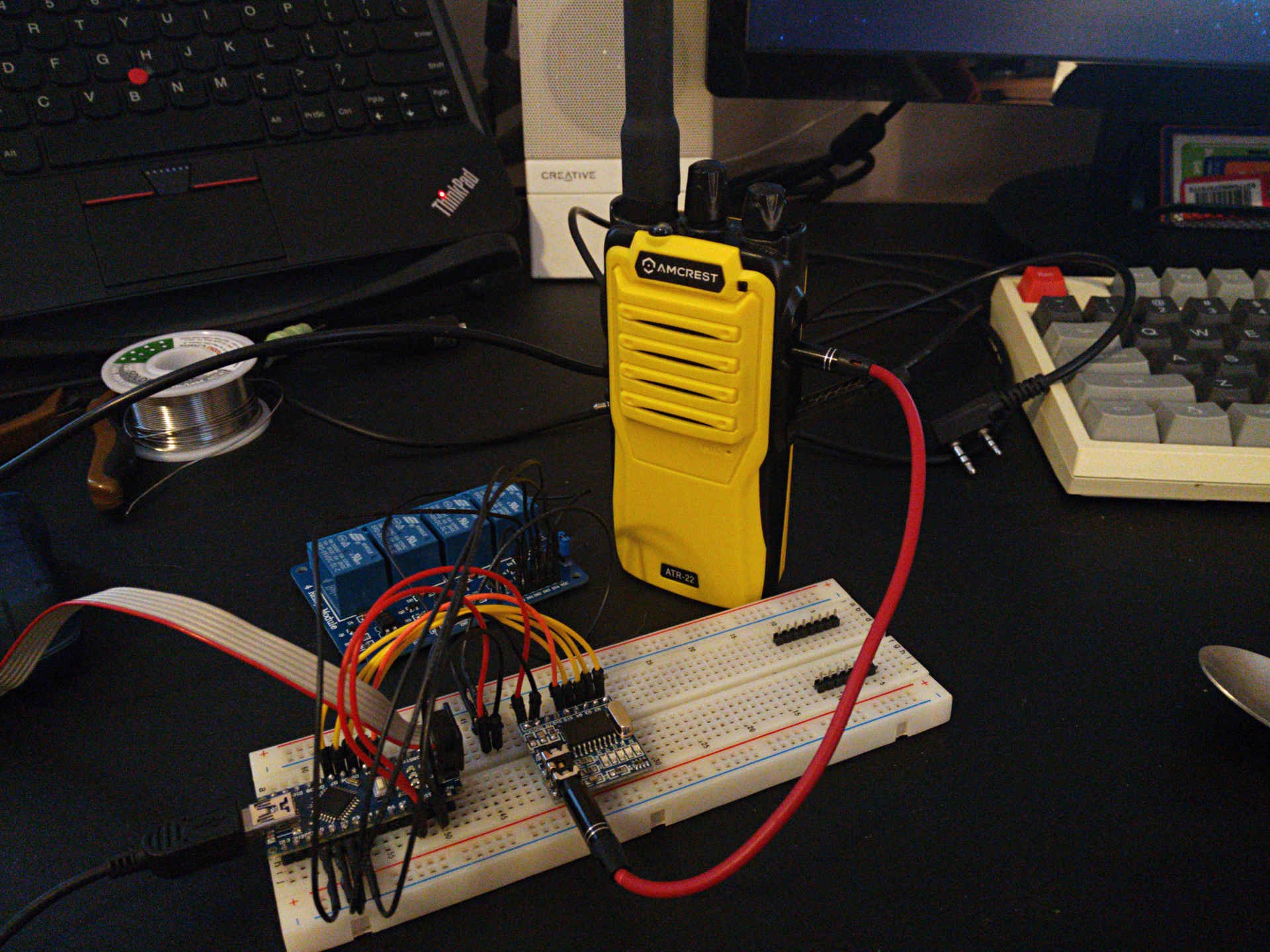 The radio I attached to the node prototype is one I snagged on Amazon for about $15 (I bought a 2-pack for 30$). I chose this radio because it was cheap and had FCC certs, but any radio with a “Kenwood” headset pinout should work. I used the keypad of my TYT MD-380 to send DTMF tones to the ATR-22, but the DTMF module showed no input. I double checked the schematic of the radio’s headset and DTMF module and found an issue. I got the schematic of the headset connector from the The (Chinese) Radio Documentation Project and the schematic of the module from a product page I found. 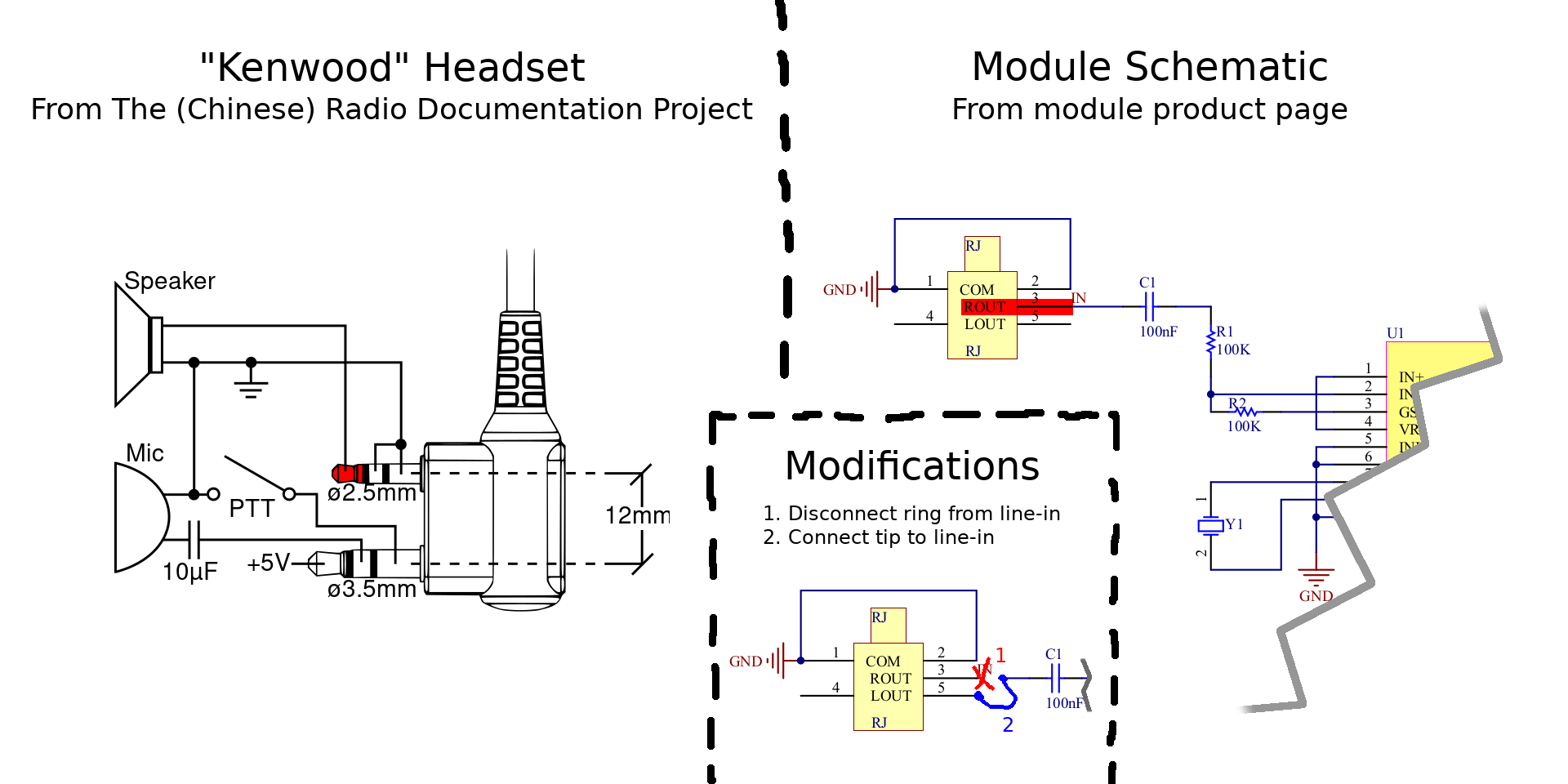 The radio uses the tip of the audio connector for audio while the module uses the ring. It is simple to modify the module to make the two compatible: the module needs to be rewired to receive audio in the tip of the TRS connector instead of the sleeve. The module I received uses a connector with exposed contacts. I used a pair of diagonal cutters to remove the middle contact then bridged the tip and sleeve pads on the underside of the board with solder. 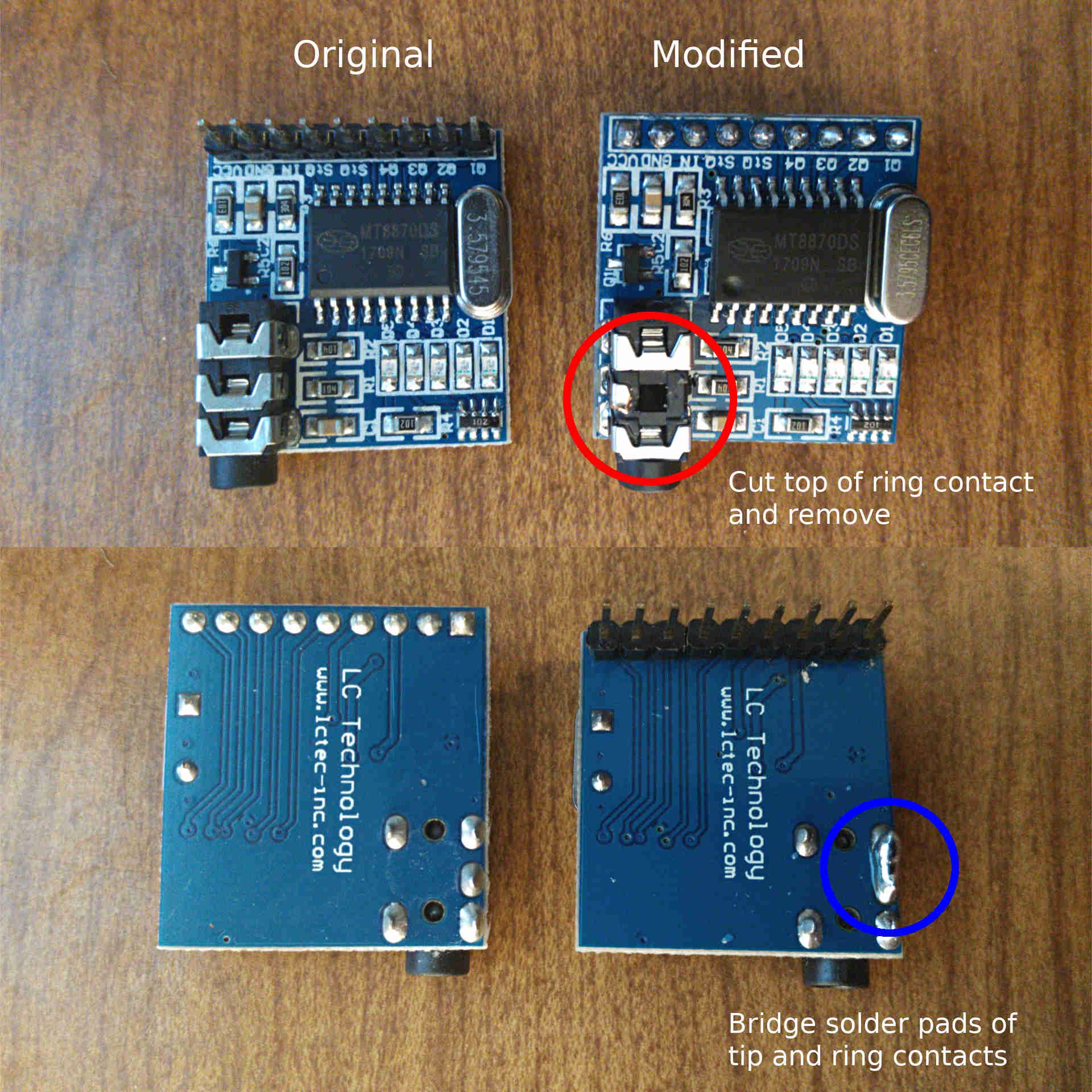 After this modification the DTMF module started receiving audio. I entered a few test commands on the keypad of the MD-380 at close range and all worked perfectly. After testing with the keypad I loaded up several commands as PTT-IDs to be sent on key-up of the PTT button. To my surprise most commands sent this way were ignored by the node. I removed the cables from the ATR-22 and listened to the tones sent by the MD-380 directly. For some reason the MD-380 does not always send DTMF tones correctly when they are sent as PTT-IDs. Almost every transmission was missing at least 1 DTMF digit and some transmissions didn’t send DTMF tones at all. I tried repeating the test after creating a fresh codeplug and reverting to a stock firmware, but nothing fixed the issue. I can only assume this is a bug in the current MD-380 firmware (v13.20).

Aside from finding a bug in my radio this test was a success. I found a receiving setup that only required minimal modification of the DTMF module and allows me to use standard audio jumper cables. Now that a radio is attached I can get to work on a transmitting interface for sending confirmation tones.