I finished a couple more features to the PTR firmware this week. The primary feature added was a command line interface for managing device settings over USB serial. Currently this interface supports setting and showing individual values, showing all values, resetting all values to default, and showing help and version screens. Configurable values are node number, reboot duration, and call duration. The following is a screenshot of the output of the help command in Minicom: 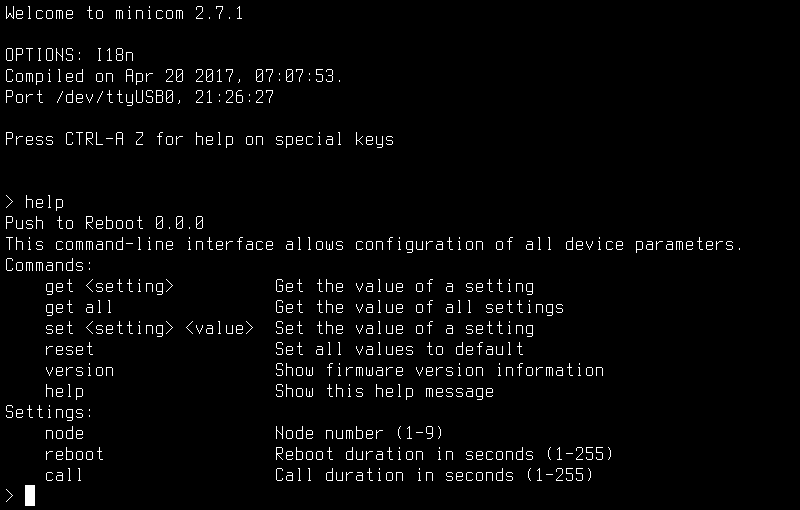 Initially this was useless because a power cycle knocked out all settings as they were stored in RAM. To fix this I added code to save the configuration to the ATmega’s EEPROM memory whenever a value is changed. The current firmware also stores the state of the node’s ports after a command is completed. This allows the device to restore to the previous state in the case of a power failure or equipment migration.

Along the way I learned more about the architecture of the ATmega. After I added the initial command line code, the firmware’s data segment bloated to over 1kB. I did some research and found this was expected behavior because the AVR utilizes a modified Harvard architecture. Constant and literal values are copied to RAM on startup which causes a ton of memory to be wasted if these values are large. I was able to overcome this limitation by using the macros in AVR Libc pgmspace.h to store string literals in program space. AVR Libc provides several string functions that operate on strings stored in program space natively, so converting the existing code was very straightforward.

There is still much to be added before an initial release can be made. My next task is going to be to create a transmit interface for the PTR controller so confirmation tones can be sent back to the controller radio.