Over the past week I added security features to the PTR firmware. Until now it was possible for anyone with a DTMF capable radio to issue commands to any PTR node within range. I wanted to prevent unauthorized control of my devices (however unlikely that may be) so I added one-time-password authentication to the protocol.

Amateur radio laws in the U.S. prohibit the obscuring of messages, but permit the use of access security mechanisms as long as the meaning of the underlying message being transmitted remains intelligible. To meet this requirement I implemented HOTP based authentication compatible with RFC 4226. HOTP utilizes a shared secret key and a counter to generate a sequence of one-time-use passwords that can be sent “in the clear” alongside the command messages of the push to reboot protocol.

The use of HOTP authentication in the PTR protocol is very simple. A controller radio issues a 6-digit one-time-password (OTP) to all nodes on the same frequency. When a node receives an OTP it checks it against a set of locally generated OTPs for a match. If a valid OTP is entered the node “unlocks” and interprets subsequent command messages that are sent within a fixed time window. This authentication provides minimal security without sacrificing the ability to use the protocol from a radio keypad. 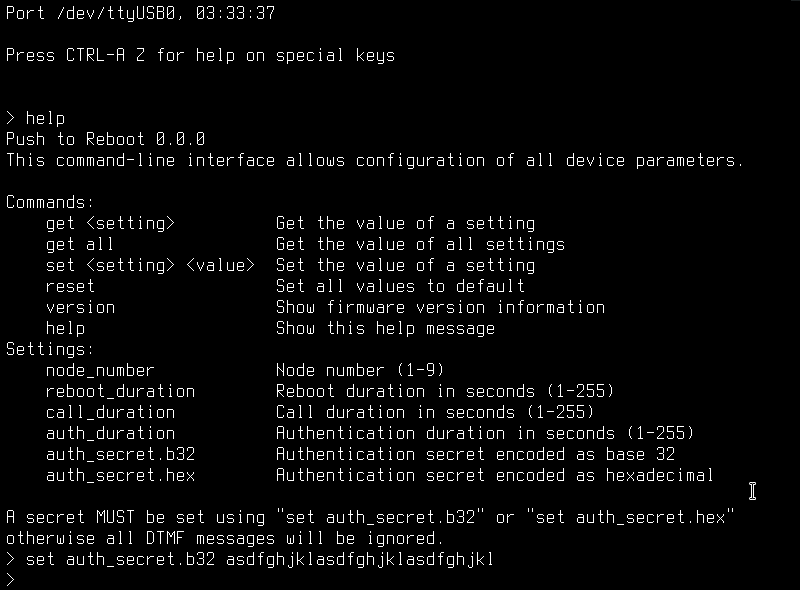 I ended up implementing all of the HOTP algorithms (SHA1, HMAC, base 32, and hex) from scratch to meet the memory requirements of the ATmega328. This added some development time, but the trade-off was more C experience and a codebase that has no external dependencies aside from avr-libc. I chose HOTP over TOTP because the ATmega doesn’t have a real time clock and I didn’t want to add anymore hardware to the project than I had to. I also took the opportunity to write tests for all of the algorithms and other bits of portable code in the project to ensure my implementations were correct.

Because the authentication is RFC 4226 compatible, common applications like Google Authenticator can be used to generate one-time passwords. I successfully used Authenticator to generate codes and send commands to my prototype. I plan to provide a video demonstration of this once I finish the PTR hardware prototype.

Security was the biggest hurdle in this project to date. Now that the hard code is written I can focus on finishing the simple hardware features that remain: a TX radio interface and local controls to override each outlet on a node.