The current global pandemic has me stuck inside with little to do so I decided to focus my energy into the Jukebox project and knock out the bits I’ve been putting off for too long. I previously pinned down most of the hardware to be used in the project: a Raspberry Pi for the SBC, a CRT TV for the display, a cheap audio amplifier and automotive speakers for sound… but didn’t think too far into the software part. I vaguely figured I’d use MPD and a CLI client to access it, but now I’ve managed to work out exactly how to configure everything.

The SBC used for driving the display and speakers of the jukebox is a Raspberry Pi 3B+. There are many popular options for operating systems for the Pi, most of which focus on solving a particular task or running a specific software stack. For this project I decided to start lightweight and build up by using Alpine Linux. Alpine is geared toward small image size and minimal running environment making it a perfect choice for things like Docker images and the Raspberry Pi. As a bonus it uses something called “diskless mode” out of the box which causes the system to operate in RAM and only touch persistent storage when committing disk changes manually. This is fantastic considering the number of SD cards I have nuked using IO-heavy images like Raspbian.

I started with a vanilla Alpine image just to see how a CLI would look on the mini TV. Right off the bat I noticed the entire display was fuzzy, colorized text was pulsing in intensity, and any output near the edges of the screen was cut off by the bezel around the tube.

At least one of these issues was solved by using the Raspberry Pi’s builtin config.txt. Alpine (and some other distros) are configured to load an additional file called usrconfig.txt from the root of the boot media. I added overscan_* options to eliminate the text cutoff and tried out sdtv_disable_colourburst to improve crispness, but I didn’t see any difference. 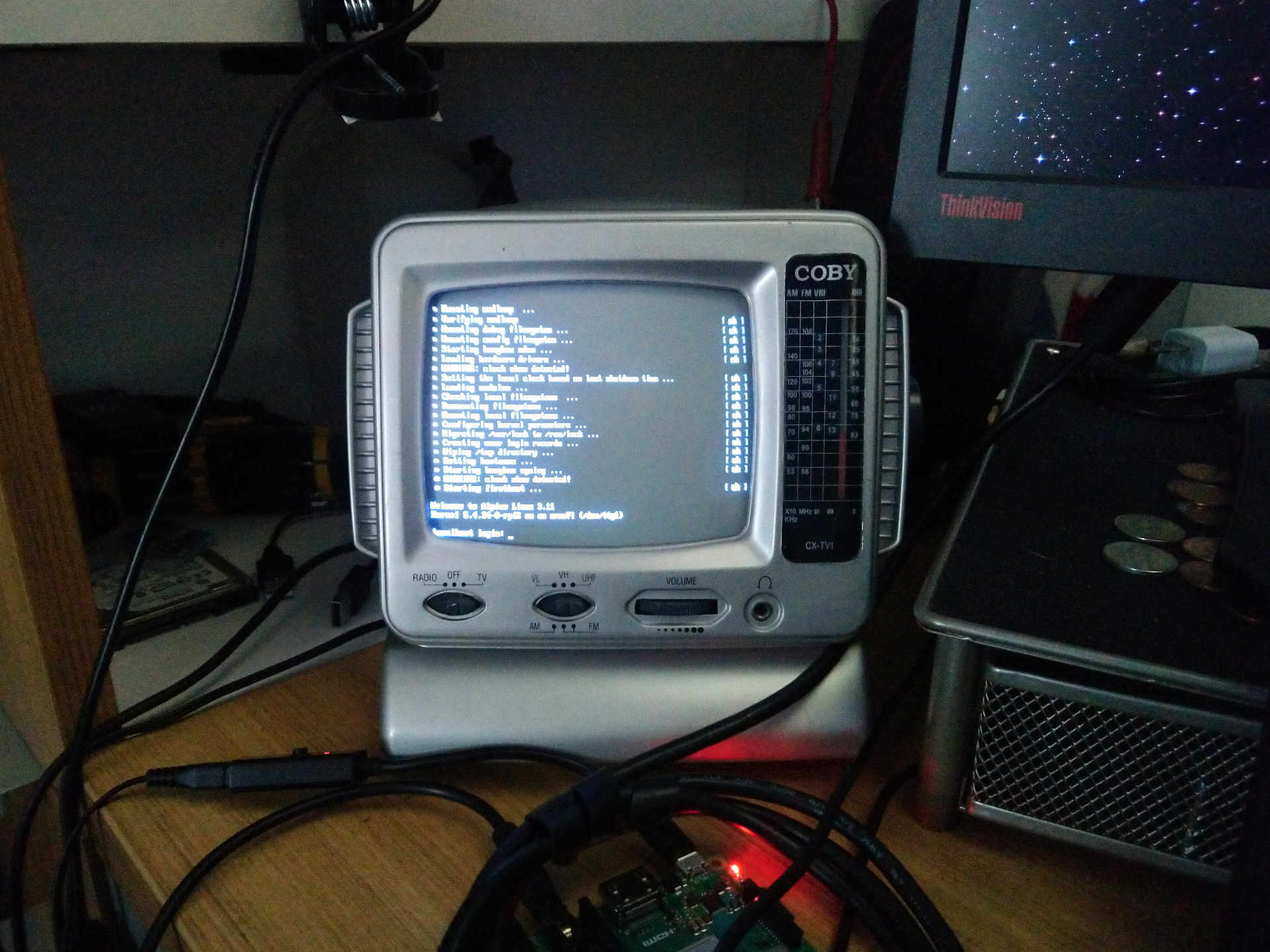 Even with all the text squeezed onto the screen it was still near impossible to read at a distance. After doing a bit of research I found that the Linux framebuffer console supports different fonts and that the Apine repo had Terminus console fonts available. I tested quite a few variants out using the setfont utility and settled on one called ter-128b. The larger font size helped reduce the fuzziness and flashing effect quite a bit. 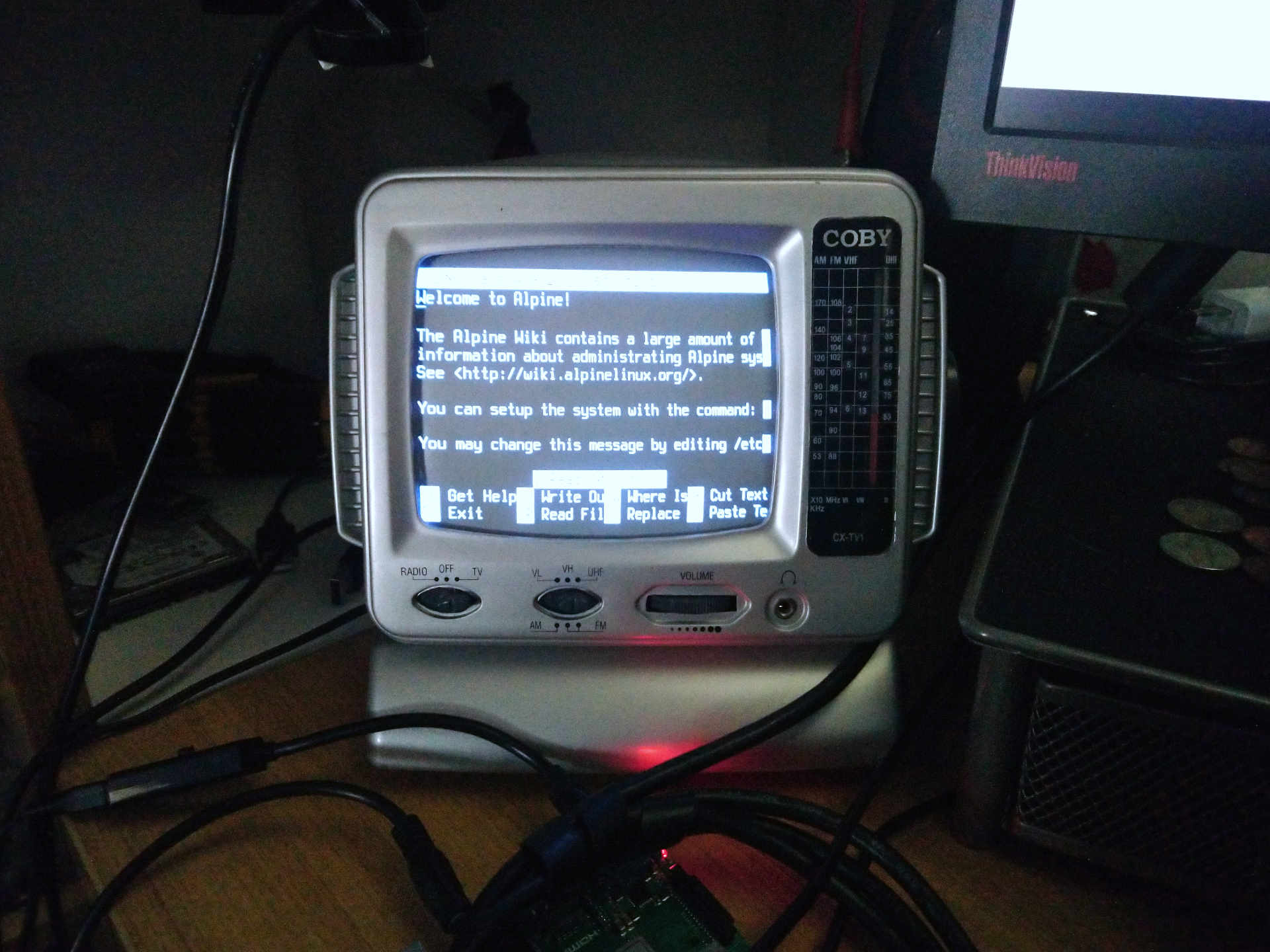 With the display bits sorted it was time to make the music parts happen. To play music I installed MPD to the Pi. MPD is a basic server that plays music locally for connected clients. To control MPD from locally I installed ncmpc which has a text interface almost perfect for the jukebox. I only want a subset of the features of ncmpc to be available, but this customization will be in another log.

All of the software was now installed, but not configured to start on boot. By default Alpine will boot into an interactive TTY on the framebuffer console at startup. To boot directly into ncmpc I edited /etc/inittab to start a custom script on TTY1 instead of getty. The custom script simply sets the framebuffer console font to Terminus and runs ncmpc as an unprivileged user (link to the script is below).

As I set software up on the Pi I created an installer that initializes Alpine for me (I screw things up often and like to have instructions/installers for the inevitable case when I need to re-image). This installer and instructions on how to use it are located in this Git repo.