While looking for upgrades for the PAC I came across a whole slew of Sound Blaster Live! cards in a spare hardware bin. I found 5 cards in total; all the cards have different model numbers with the exception of 2 cards that share the same model number but have different board layouts. The models include SB0410 (24-bit), SB0200 (Dell OEM), CT4830 (Value), and two CT4780 (Value). 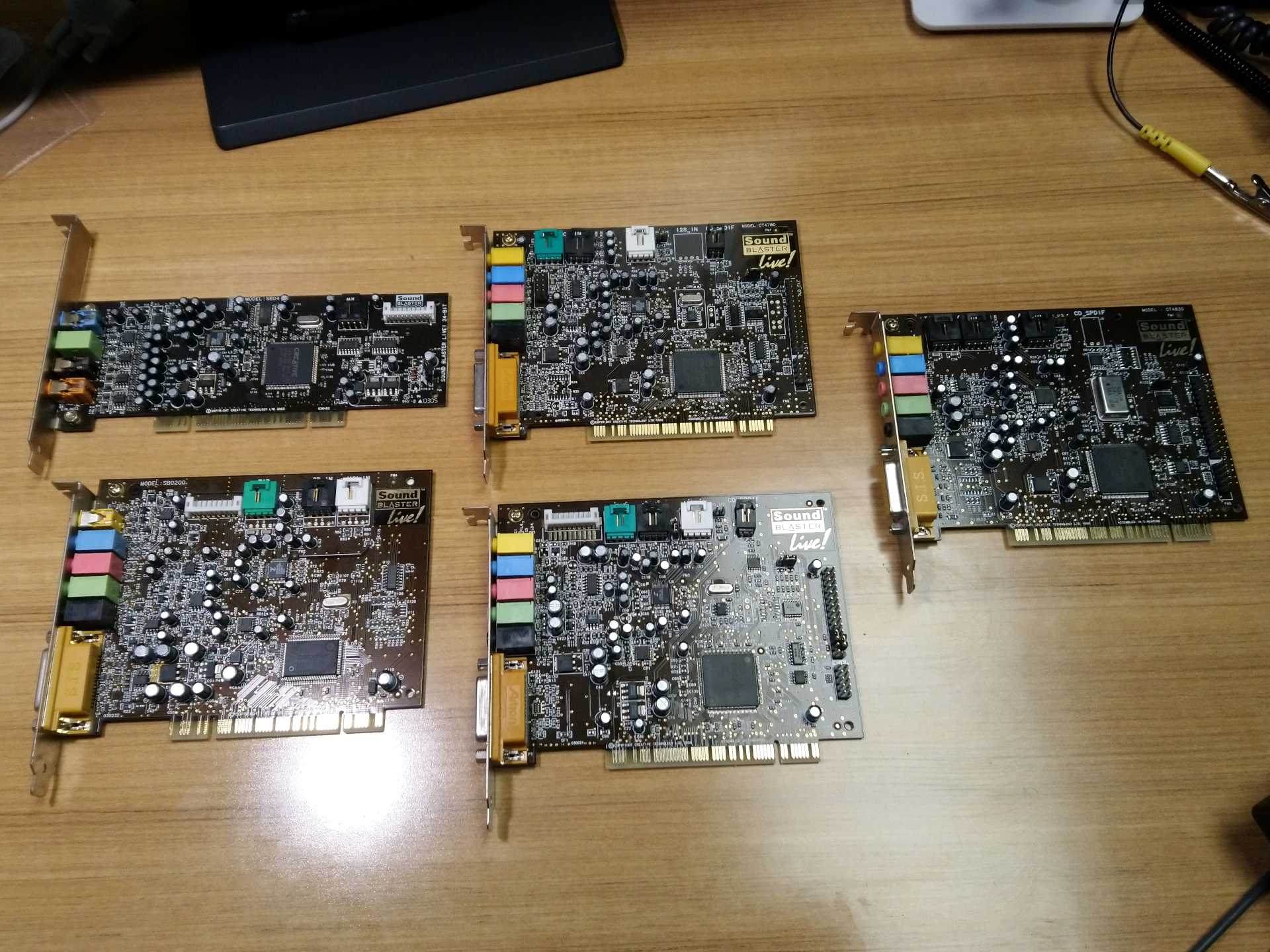 My requirements for a sound card are simple enough. Mainly I need a card that will work well in Windows 98 SE and possibly has a game port to have some fun with down the road. Luckily, the Sound Blaster Live! cards have good 98 support and most of the models here have a game port.

The first card I decided to eliminate was the Sound Blaster Live! 24-bit model SB0410. This card is a different size and shape than the other cards and lacks a game port. The main audio IC is a Creative CA0106-DAT LF which is also different than all the other Sound Blaster models I have on hand. This appears to be a nice card, but it lacks the game port that the other cards have. 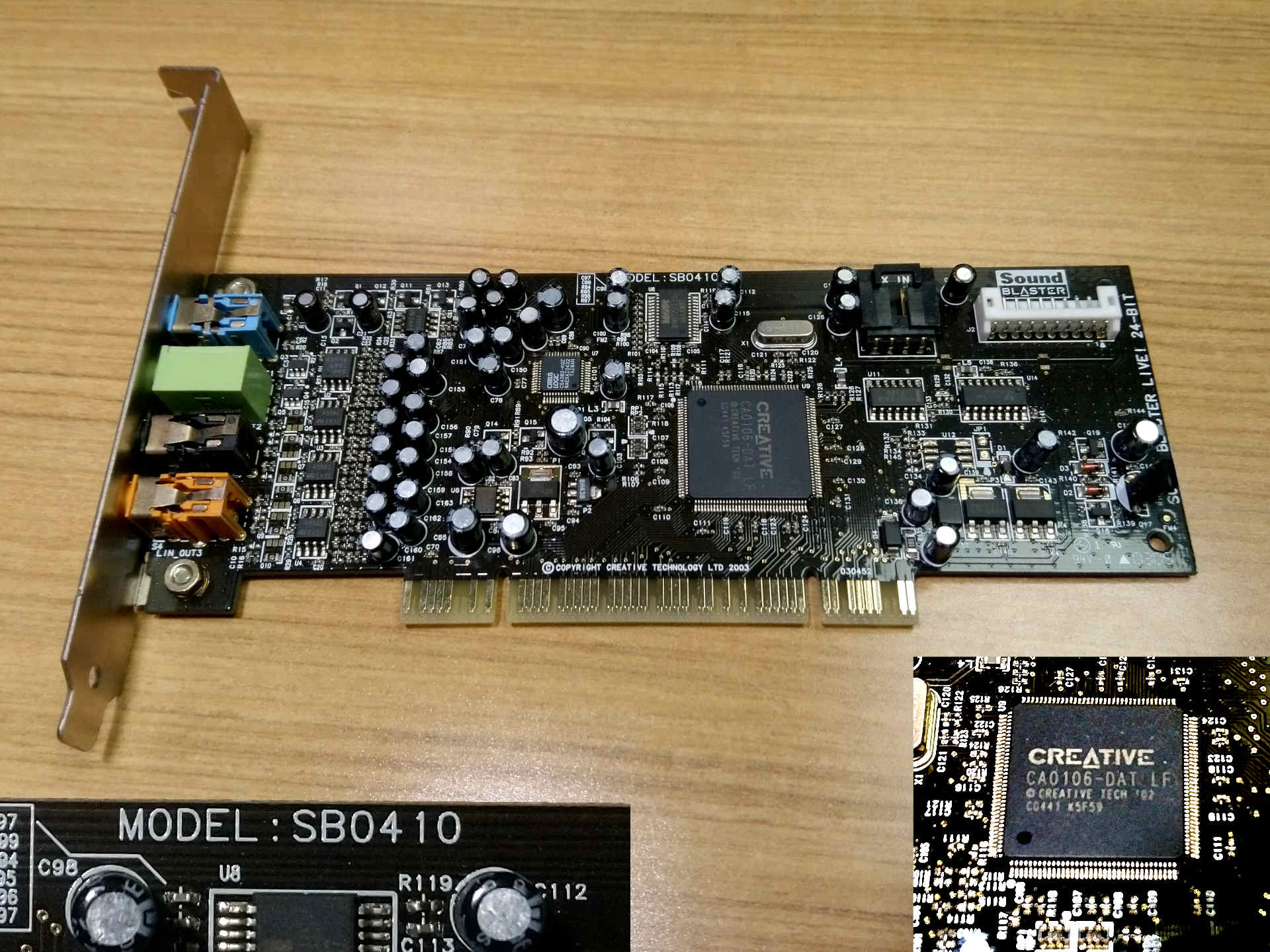 Another card I decided to eliminate was the Sound Blaster Live! model SB0200. This card looks simmilar to the other Sound Blaster Live! cards, but carries the IC EMU10K1X-DBQ that is noticably smaller than the ICs on the other boards. Apparently this version of the card was sold by Dell as part of prebuilt systems and lacks some features of the original and Value variants. 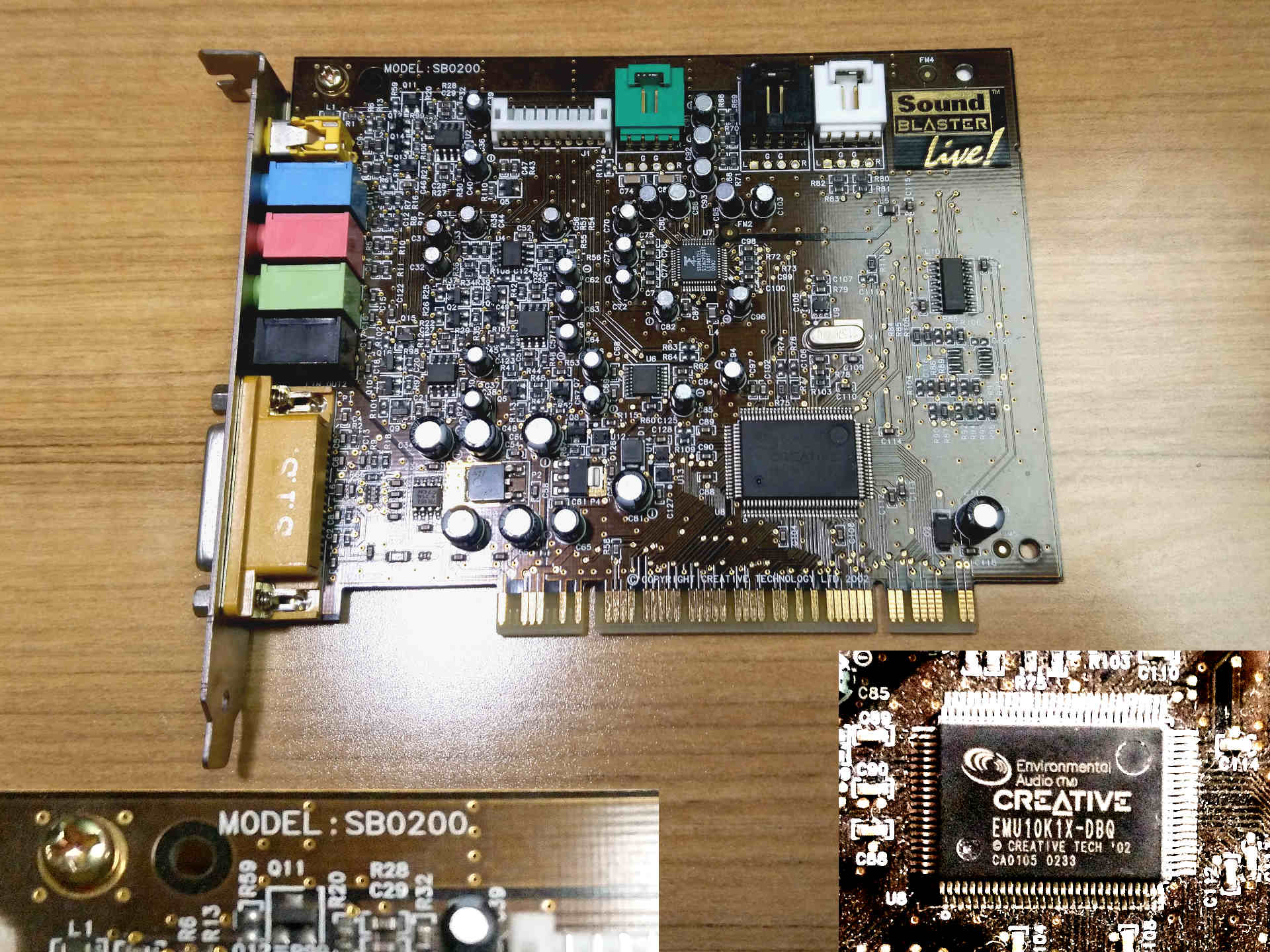 From what I can tell the remaining 3 cards are more or less equivalent. Two of the cards are model number CT4780 and the other is model CT4830. With no clear winner I hit up vogons.org to see if either of the models had obvious issues. When looking for driver recomendations I noticed several instances where one person would have luck with a certain driver and model of card, but another person trying the same combo would have issues. It appears that Creative might have used multiple versions of hardware for models that have the same model number. I can confirm that at least the same model cards can use different PCBs as seen on my two CT4780 cards. 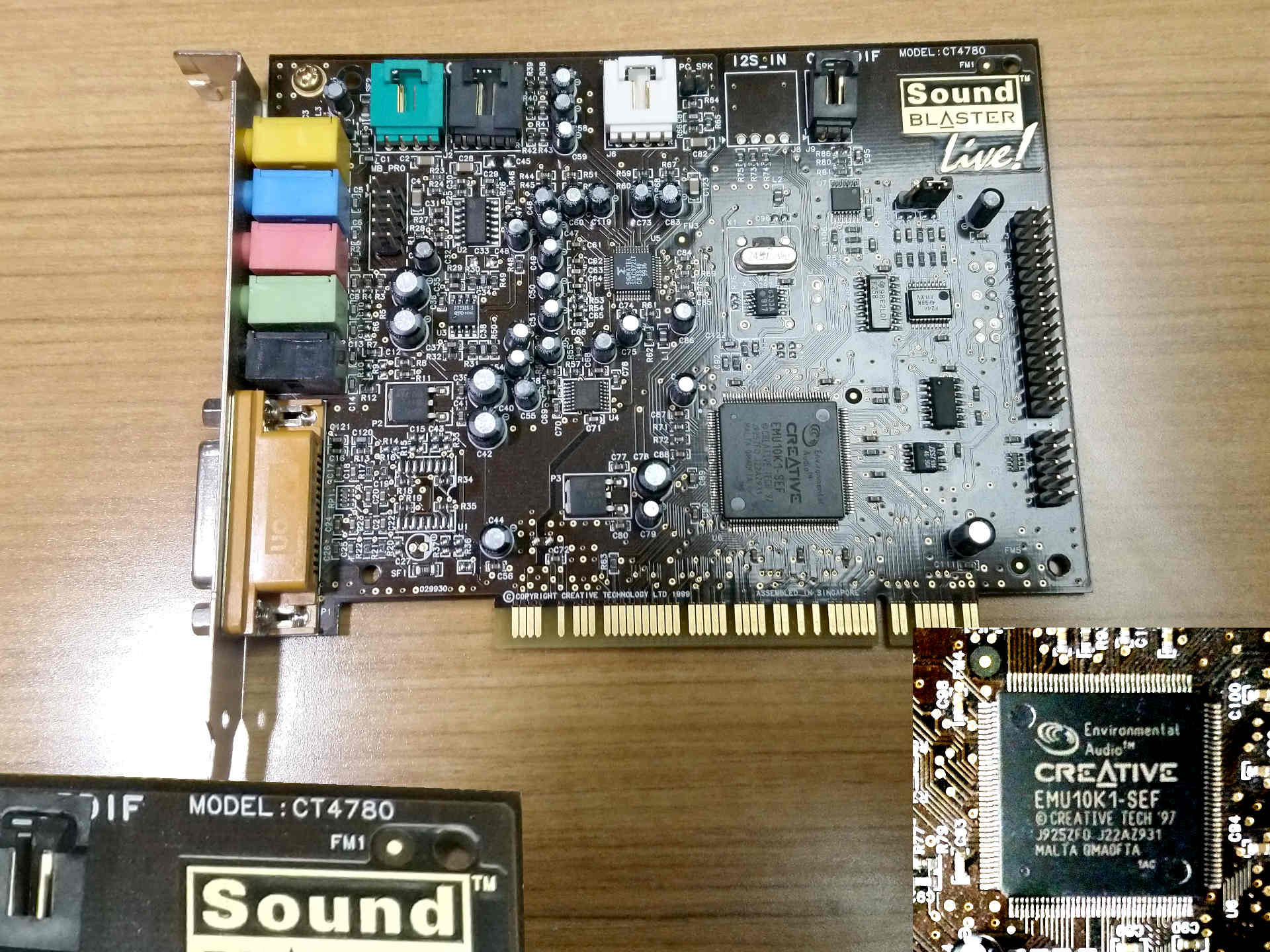 The cards have the same model number, but have different PCBs. One version of the card has a couple additional headers that the other does not. 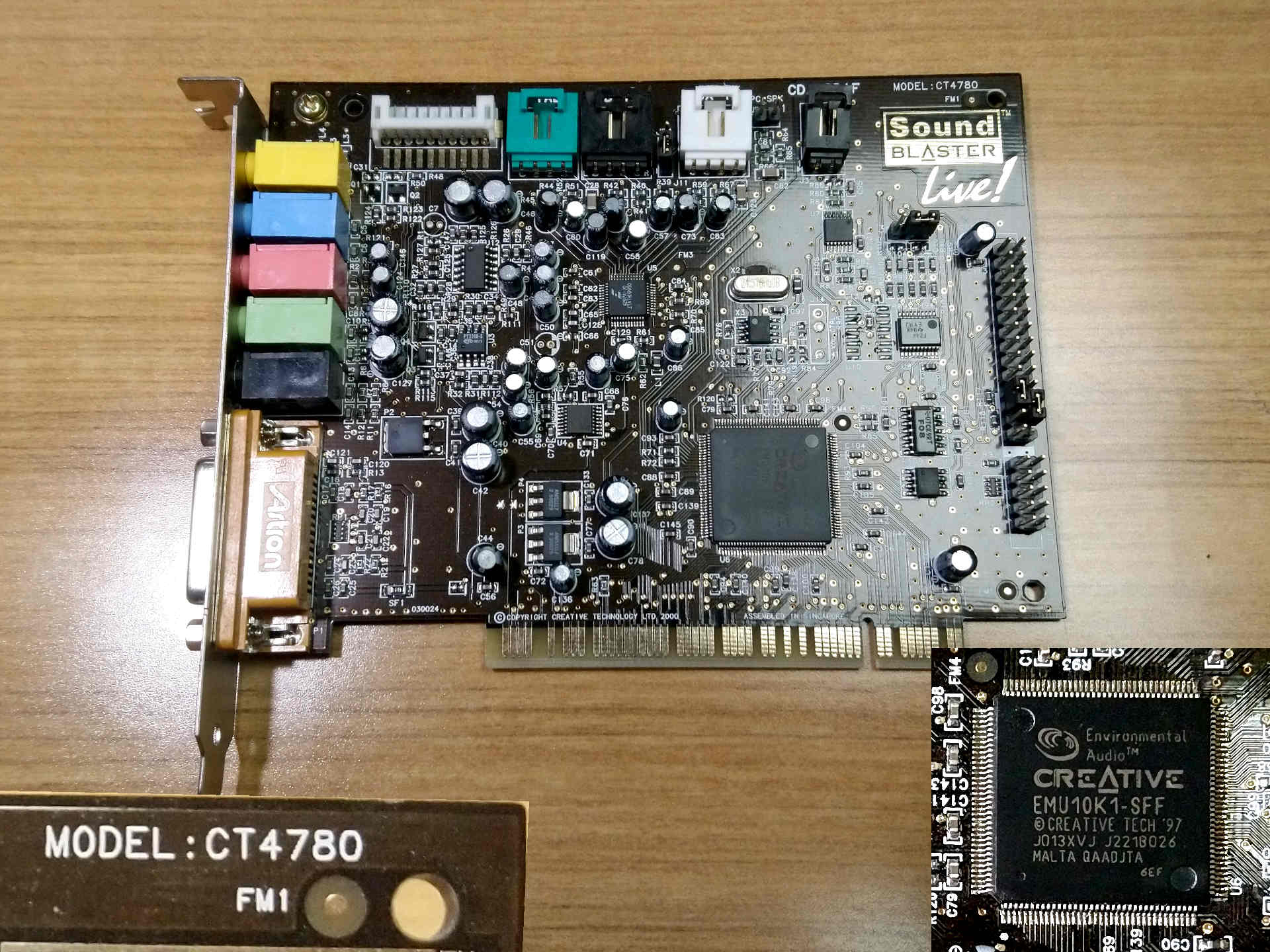 When searching for the final model CT4830 I ran into an interesting thread about using Audigy2 ZS drivers with Sound Blaster Live! cards. Apparently this method is compatible with quite a few Sound Blaster Live! cards and provides some benefits over the Live! VxD drivers like supporting the use of custom soundfonts when running DOS programs under Windows. 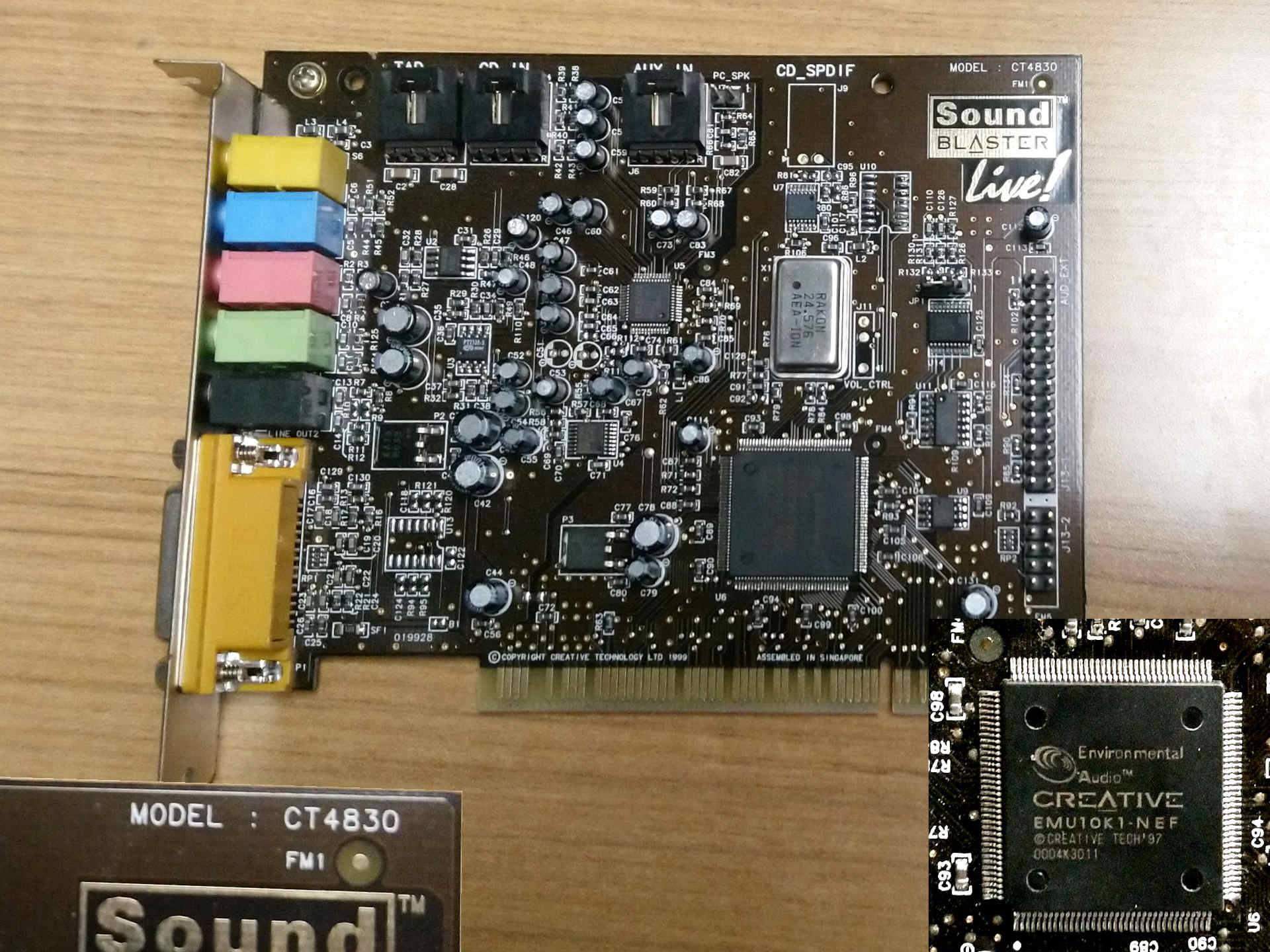 I decided to try out the Audigy driver method and go with the CT4830 card (other users had luck using the same model). After physically installing the card I booted into Windows and followed the driver install guide. Several reboots later I had working sound through headphones plugged into the green port.

Initially I tried a known working card to make life easier, but after a seamless install I got curious and decided to test all the cards with the Audigy drivers. The Vogons guide by Joseph_Joestar specifically mentions starting with a Windows install devoid of audio drivers so I broke out a second CF card and found a pre-Sound-Blaster backup image I made. For each of the remaining sound cards I wrote the “clean” 98 SE image to a CF card using dd, booted up, and followed the install guide. Below is a summary of the Audigy driver support.

All drivers marked “Yes” above were detected by the Audigy installer. I didn’t do thorough tests of each card; I just installed drivers and ran doom95 within Windows to verify the default sound font was working. In the end I picked the CT4830, but any of the Value series cards would have worked.

Overall I’m happy with the audio solution I ended up with. Even the tiny soundfont included with the Audigy drivers sounds quite nice. A possible future upgrade might be to add a small speaker to the case or connect the internal PC speaker to the Sound Blaster.